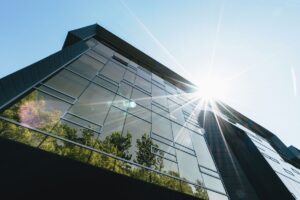 A Zero Energy Building (ZEB), also known as a Net Zero Energy (NZE) building or a Zero Net Energy (ZNE) building, is a building with net-zero energy consumption, which means the total amount of energy used by the structure on an annual basis equals the amount of renewable energy generated on the site. These are energy-efficient structures with very low energy demands that are met by renewable energy sources. The goal of these buildings is to emit less greenhouse gas into the environment throughout their operations than similar non-ZNE structures. Zero-energy buildings are driven not only by a desire to have a lower environmental impact but also by financial considerations.

Energy costs have risen dramatically in recent years, fuel supplies have depleted, and global warming concerns have surfaced. Only 30–35 percent of the energy input is converted into electricity in power plants. The remainder is discarded as waste heat. During the last 200 years, Earth’s source of fossil fuels has been rapidly depleting, resulting in significant rates of climate change harm. New fossil fuel deposits are becoming more difficult to come by. The ones that have been discovered are far smaller than those that have been discovered previously. Coal will survive longer, with a life expectancy of 2100. A building that is designed to be more sustainable has the potential to reduce the human impact on the environment.

To design a net-zero energy building, it is necessary to first describe the sources and inputs that will be required to quantify the outputs and determine what is required to balance the net energy consumption. Next, use various energy modeling techniques and tools to optimize: building orientation, glazing area, exposure, and shading, heat island reduction, lighting systems and capacities, temperatures, humidity, and relative humidity, natural resources such as solar energy from solar panels, wind energy, and so on. By implementing passive heating or cooling tactics such as solar chimney and direct heat gain, all variables should be examined simultaneously. After that, the building should use a life cycle analysis, a net-zero water system, and a net-zero energy and water system.

There are three principles to achieving a good net-zero energy building design:

Not only the building should be oriented to minimize HVAC loads, but shades and overhangs should be used to reduce the direct sun rays. Increasing insulation on opaque surfaces, utilizing glazing with low solar heat gain coefficient values, employing a double-skin facade, and revising the building envelope to meet location conditions are all ways to limit heat input through windows.

There are various renewable energy resources, such as solar which can be used for generating electricity, storing energy, and heating water, wind, biomass systems, and other sources. Solar water heating systems and photovoltaic systems can be used to store energy and help in shifting the peak load.

Buildings that are net-zero energy have several advantages, including isolation from future energy price increases for building owners, increased comfort due to more-uniform interior temperatures, a lower total cost of ownership due to improved energy efficiency, reduced total net monthly cost of living, the lower total net monthly cost of living, reduced risk of loss from grid blackouts, minimal to no future energy price increases for building owners reduced requirement for energy and carbon emission taxes, improved reliability like photovoltaic systems lasting more than 25 years, higher resale value and also further contributes to the greater benefits of the society, e.g. providing sustainable renewable energy to the grid, reducing the need of grid expansion. Demerit of having a net-zero energy building includes having the initial cost of getting a net-zero energy building higher, unavailability of designers or builders to build ZEBs, there are challenges to recover higher initial costs on the resale of the building also solar energy capture using the house envelope only works in locations unobstructed from the sun.

To find out how we enable net-zero buildings, contact us at sales at Oakridge dot co dot in.