How does Solar PV work with Farming?

Solar Energy is energy being generated from the sun, the sunlight is converted into electrical or thermal energy through the photovoltaic (PV) effect. In today’s time, Solar Energy is getting adopted by all sectors, there are a number of benefits attached to Photovoltaic (PV) technologies and the whole world has started acknowledging it – prominent benefits being Savings and Environment Friendly. The same situation is in the farming sector as well. Solar Farms are emerging. A solar farm is a large assemblage of photovoltaic (PV) solar panels that are oriented toward the sun which converts sunlight into electrical energy and are installed on the grounds instead of on rooftops. Farmers are reliant on weather conditions, i.e., there should be the right amount of sunlight, rains, and no extreme winds or storms and it makes conventional farming a risky business, however, these can be to an extent controlled through the installation of the solar system. Farmers can meet their electricity and water requirements through the solar system. 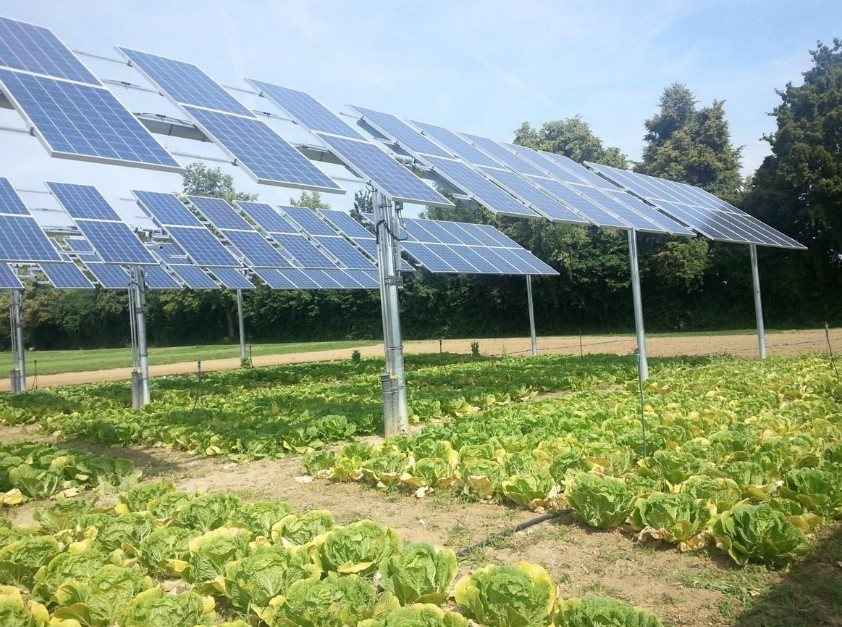 Farming is mostly done in rural or remote areas, where electricity supply is not optimal, and farmers use water pumps for irrigation which has an undesirable effect on the groundwater level. Through Solar PVs, farmers receive uninterrupted electricity supply, and also their water pumps will not be on at all times, saving groundwater levels as well. It eventually leads to cost savings as well. The per-acre cost of the solar plant has also reduced over several years, which become cheaper for farmers as compared to the cost of conventional farming. The end result for farmers will be a stress-free lifestyle and assured financial gain.

The concept of combing solar panels and areas where food crops are grown is known as Agro photovoltaics. In this, the electricity produced powers the crop processing plant and other farm types of equipment, which increases the efficiency by at least 60%. However, there were apprehensions about this as some thought that it would reduce food production because the solar system needs a place for installation, however, these days’ solar panels are getting installed a few feet above the land which leads to no wastage of area and creates a shade for the farmers to either graze their animals or grow shade-resistant crops and thus there are able to maintain their crop production during solar generation. It will reduce land competition and increases land efficiency as well. Through this, farmers can take a step toward reducing their carbon footprint and can become leaders in adopting sustainable practices and can use this for their marketing as well. All these practices are environment-friendly and non-polluting, and this will lead to less fossil fuel consumption thus taking forward the concept of a cleaner and greener environment.

Thus, Solar PV can transform conventional agriculture practices by offering farmers the opportunity to receive low-cost electricity and by selling out if in excess. Also, it can increase the efficiency of the land and result in increased land efficiency. Agro photovoltaic is justly the novel and innovative way of using solar technology with conventional farming.