The increasing price of Solar Modules -Why this is the correct time for solar installation?

Solar panels have been a great source of energy in India for a long time but it is only recently that due to their price drop, they have become more accessible to a larger population. With such an economic and environment-friendly option at their disposal, many people in the country are slowly shifting to solar panels. The wise have realized that it is a shame not to use the most natural source of energy available to us- sunlight and this has led to the growing popularity of solar panels [1].

In the past decade, the world has witnessed a solar boom. Annual Solar Installations across the globe have increased from 18 GW in 2010 to 183 GW in 2021 and are projected to increase to 334 GW by 2030. Similarly in India, Cumulative Installed Solar Capacity has increased manifold from 161 MW in 2010 to 42 GW as of December 2021. In India, tariffs discovered in utility-scale solar tenders have fallen from INR 10.95/kWh in 2010 to INR 1.99/kWh in 2020, which is significantly lower than INR 5-7/kWh tariffs for new thermal power projects [2].

A major driver of such a downtrend of solar tariffs has been solar modules, which contribute 62-67% of the total project cost, and their price/Wp has consistently fallen over the years. Average monthly global solar module (crystalline) price fell and this represents an approximate ~23% Year-on-Year fall in module prices in the same period. It was an inherent assumption of all stakeholders that this trend will continue [3].

This price rise has been mainly driven by a sharp increase in the price of polysilicon, a key input for cell and module manufacturers. In a report, ICRA stated that given the import dependency for PV modules for a majority of the solar power installations in India, such hardening in the price of PV modules, if sustained, remains a near-term headwind [5]. 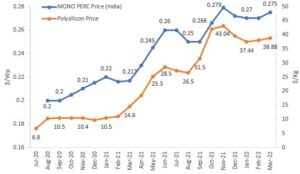 Supply chain disruptions – Polysilicon is the critical raw material in solar PV manufacturing. Its reduction in price over the years has been the major factor contributing to declining solar module prices. However, post-July 2020, polysilicon prices in the global markets increased from Rs 520/kg to 3300/kg in November 2021 (six times increment). Other disrupting factors in the PV supply chain include price hikes for commodities such as glass and metals, shortage of containers, etc.

Augmentation of demand – Supply-demand mismatch is another major factor contributing to the increase in solar module prices. Over the past two years, the demand and acceptance for solar worldwide have exploded. The demand for cheaper and cleaner sources of energy, with corporates globally setting up decarbonizing and Net Zero goals, is further driving the growth of demand for solar. In such a scenario of demand outstripping supply, the price of the concerned commodity increases.

Impact of basic customs duty (BCD) and Approved List of Models and Manufacturers (ALMM) – From April 2022 onwards, BCD is applied to the import of solar modules (40%) and cells (25%). Additionally, government-mandated solar developers to only use ALMM enlisted modules for government projects, government-assisted projects, those under government schemes and programs (e.g., Component A of PM-KUSUM scheme) as well as open access and rooftop net metering projects.

Miscellaneous – The solar manufacturing industry, still highly concentrated in China, was affected by the rolling blackouts implemented by the government of the energy-intensive industries. This crisis compounded an already difficult situation and contributed to increasing in module prices in short term. With covid cases surging in China post-March 2022, the Chinese government has imposed strict lockdowns across several major provinces. Thus, this hindrance to solar manufacturing in China may affect solar module prices at least in the short term [4].

With ever-increasing demand, it is imperative for supply to catch up to stabilize solar module prices. Therefore, investing in solar energy before major fluctuations in the prices becomes a wise decision, and further, because of the supply-demand mismatch, it can be concluded that solar module prices are not expected to come down anytime soon.