The sun produces solar energy in the form of heat and light. Protons, which are individual particles of solar radiation, move a large quantity of solar energy, which is collected by PV panels and subsequently turned into electricity. PV panels are made up of a tiny number of particles called silicon fibers, which are primarily utilized to trap as much solar energy as possible. Solar energy is a non-polluting renewable energy source that does not produce any greenhouse gases. 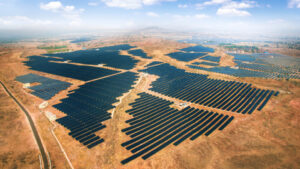 A solar park, sometimes known as a solar farm, is a commercial or utility-scale solar PV system that is typically but not always built on agricultural land. The majority of solar parks are built by developers that engage into long-term (25-year) land lease agreements with farmers or landowners in exchange for an inflation-indexed rent. Solar parks have a low environmental impact and do not require a ‘change of use’ because they are granted a 25-year temporary planning permission. They can coexist with the grazing of sheep or poultry on the property, as well as meet set apart land and biodiversity enhancement goals. A solar park can be totally demolished without leaving a trace if necessary.

Solar power projects can be built everywhere in the country, but their dispersion results in higher project costs per MW and higher transmission losses. Site development, drawing separate transmission lines to the nearest substations, obtaining water, and constructing other necessary infrastructure are all significant costs for smaller projects. Project developers also take a long time to acquire property, obtain a change of land use, and obtain numerous licences, which causes the project to be delayed. To address these issues, the “Development of Solar Parks and Ultra-Mega Solar Power Projects” scheme was launched in December 2014 with the goal of making it easier for solar project developers to set up projects in a plug-and-play fashion.

Bhadla Solar Park, the world’s largest solar park, is located in Bhadla, Phalodi tehsil, Jodhpur district, Rajasthan, India, and spans a total area of 14,000 acres. The climate in the area has been described as “nearly unlivable.” Bhadla’s average temperature is between 46 and 48 degrees Celsius. Sandstorms and strong winds are common. Bhadla is a 45-square-kilometer sand, dry, and arid location. The total capacity of the solar park is 2,245 MW. The park will become the world’s largest fully commissioned PV project when it reaches full capacity, with an investment of Rs 10,000 crore.

Pavagada Solar Park is a solar park in Pavagada taluk, Tumkur district, Karnataka, that spans 53 square kilometers (13,000 acres). The Solar Power park has a capacity of 2,050 MW and is the World’s second-largest photovoltaic solar park after the 2245 MW Bhadla Solar Park in Rajasthan. It was completed in 2019. .It was finished in the year 2019.

The Kurnool Ultra Mega Solar Park is a 1,000 MW solar park with a total area of 5,932.32 acres in Panyam Mandal of Kurnool district, Andhra Pradesh. Solar power developers and the Central and State governments put in roughly 7,000 crores to build the park. Andhra Pradesh Solar Power Corporation Private Limited commissioned it on March 29, 2017 and owns it.